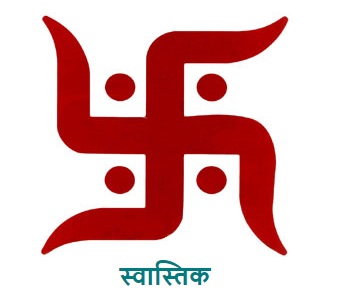 Although it’s pretty surprising, the repentance of the copyright and patent violations and disputes among the various nations makes us somewhat used to it. There are pending cases in the ICJ (International Court of Justice) and other world bodies pertaining to the disputes about the ownership of various items.
One very notable, yet rarely argued, copyright violation is of the use of Swastika. Owing to the symbol’s use by a Nazi party in Europe at the start of the 20th century. It can’t be argued that the intention for using the logo as their party logo was good. Even they considered the Swastika as the symbol Good luck and auspiciousness, just like it was considered in the religion or faith that introduced Swastika to the world. However, due to the atrocities done by the Nazi party on the Jews, and the use of Swastika by the party brought bad name to Swastika, values that it never stood for.
Origin of Swastika:
The word Swastika is a Sanskrit word which means- Su- Good; Asti- Exists; ka- make. Which stands for Maker of Goodness. This is one of the most revered symbols in Hinduism where it originated and has always been auspicious in all faiths, religions, cultures across the world that has used the symbol. The use of Swastika dates back to 3000 BCE. The symbol first appeared with the archaeological findings of the Indus valley Civilization. It was also later found in cultures around Black and Caspian sea. Owing to the strong trade relations of Indus valley Civilization with Mesopotamian civilization, the use of Swastika traveled as far as Western Asia and then to Europe in the 17th century AD. The use of Swastika in East European architecture started taking precedence as early as 8th century BCE. later it went on to be a contemporary for majority of civilizations and culture across the world, including the North American continent.
As with any other things, viz. culture, scriptures, names of Gods and Goddesses, languages, that originated in Hinduism, Hindus have never tried to take exclusive rights to anything. Instead, the faith believes in sharing. You may take an example of any other religion that still survives in 2018, Hinduism is largest and oldest of all. It never tried to conquer any other faith. It never forced its beliefs on other. It never encouraged it’s followers to conquer other people or rule over them. Instead it allowed people from other faiths and culture to live with it’s followers. With the mantra- “Atithi Devo Bhawa” a Sanskrit term which means Guest is our God, the religion has always tried to be inclusive which was brutally exploited by people who took the goodness of Hinduism as its weakness. Hinduism has not only been inclusive, it has also been loving to people who don’t believe on its teachings. Sikhs, Buddhists and many newer religions are comprised of people who couldn’t understand Hinduism completely. However, Hinduism still loves those who left it. It preaches its followers to love those who left them. That’s in contrast with any other religion in this world. When Hinduism has made so many sacrifices and has succeeded in keeping its followers the happiest, Swastika could not be an exception. That’s the reason, Hinduism has never claimed exclusive rights on it. However, the world must understand the symbol did not originate in early 20th century by the Nazi party of Europe. It originated much earlier than civilization reached Europe. The western world must stop getting scared of this symbol and embrace it as it used to do in the pre-Nazi period.

3 thoughts on “Swastika: The biggest copyright violation of this world”